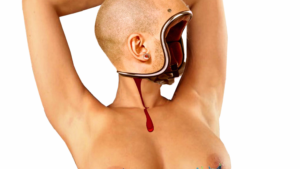 Logline: An illicit spam email arrives at the wrong time and pushes a man over the brink when his wife thinks he’s having an affair. Unable to convince her otherwise, he enlists an weird friend and they go on a bizarre and hilarious journey trying to put things right.

Overview:  An unusual combination of drama, comedy and words.

These days it is very strange to find a unique story being told. It is always the same plot and same characters, people have gotten used to familiar formulas and script writers just seem to be happy sending the same script out time and time again with slight variations in the character names. And this doesn´t just happen with short independent scripts, in fact this lazy recycling is most evident in big super productions. As if the big companies said, why bother with original plots and creative stories when all people care about are special effects and 3D.

Well, ‘Chocolate Potato’ is not one of those stories. It stands out as an original and entertaining story. The tale that ‘Chocolate Potato’ tells is about a young couple trying to conceive a child; most likely as a last ditch attempt to salvage the relationship, they seem to care about each other but the fire is just gone by now. After a particularly sad sex scene takes place the lady of the house tries to get her mind off the troubled relationship and contacts a friend to plan a night out. She borrows her husband´s laptop and while using the email system she notices a mail has been sent to her husband.

The mail comes from a woman claiming to have had sex with him and offering to do so a second time. Enraged she breaks everything in sight and ends the relationship on the spot. Unbeknownst to her, this email was sent, not by a female lover but by a male hacker, the email was just a piece of unfortunate spam that ended up being read by the worst possible person at the worst possible time.

What follows is a tale of intrigue, betrayal, murder, complicity and, surprisingly, comedy and romance. With a mad wife taking revenge on her husband and starting a new relationship that reminded her of what she really wants in a partner, a mad husband seeking revenge on the hacker that destroyed his life, a cheating best friend running away from the government and flirting with neighbours, all the while serving as the comedic relief.

This sounds like a strange combination of storylines to coexist in a single script but it does work out, with all storylines brought together by common elements and remaining believable in spite of all the absurdity of the situations depicted. It clearly falls within that lost British genre of ‘Farce’ something the British ruled the waves on. ‘Chocolate Potato’ breathes new life into this seemingly long forgotten genre.

This definition epitomises ‘Chocolate Potato’ and offers a synopsis in one sentence.

The characters in the script are all flawed and troubled, some are complete dirt-bags, some are obsessed with sex, and others are quick to irate and wind up. And yet all this does is contribute to them feeling like real people, dealing with real problems, making it quite easy to care for them and stay interested in the outcome of their ordeals, no matter how bizarre their situations.

The dialogue of the script as well as the scenes depicted are definitely not for children, lots of sexual innuendo, lots of explicit talk, bad words and, once again, surprisingly, lots of comedy. The conversations in the script take place among mature people behaving like children and it is precisely mature people with young hearts that the humour of the script is aimed at, as they will be the ones to enjoy the most out of the jokes and references in play, for even when the script gets a little a raunchy or lewd, it will still elicit at least a chortle from the readers.